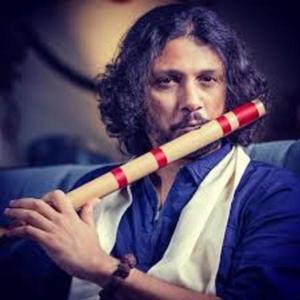 Indian Classical Flautist, Film Composer, Music Arranger / Producer, Singer, Poet and a man of many more talents, Ashwin Srinivasan, a child prodigy, has successfully collaborated in Western Classical, Jazz, Fusion, Electronica, Bollywood and Hollywood with some of the greatest names from around the world.

Born into a family of musicians, Ashwin was initiated into Indian Classical music when he was just two years old. He started learning the Sitar from his Mother, who is a student of the Pandit Ravi Shankar style. But he took a fascination for the 'Bansuri' (Bamboo flute) at the age of seven.

He was trained in the techniques of the Bansuri by Shri Venkatesh Godkhindi and Shri Pundalik Shenoy of Bangalore. He has also trained under the legendary Violinist, Padmabhushan Dr. Smt. N Rajam in Mumbai, who is a pioneer of the ‘Gayki’ (Vocal) technique. One of the youngest A-Grade artists with All India Radio and having been a recipient of the ‘Sur-Mani’ award, Ashwin has performed classical concerts in various prestigious festivals such as the Gandharv Mahavidyalaya Smriti Mahotsav, Panchakshari Gavai Mahotsav and Akashvani Sangeet Sammelan.​

Apart from being a performing Indian Classical Musician, he has been one of the most sought after session flautists and is known not only for his Bansuri, but also for his proficiency in various other world folk wind instruments. Being an integral part of most of Bollywood music, he has also worked on prestigious Hollywood films such as “The Namesake”, “Amelia”, “Midnight’s Children” and “The Reluctant Fundamentalist”, "Mowgli" and "Queen of Katwe", thereby working with some of the biggest Hollywood composers such as Gabriel Yared and Gustavo Santaolala. He has performed all over the world with almost all leading musicians of India, both on stage and as a session musician.

He has been involved in a number of music concerts and recordings with Nitin Sawhney (UK) during which he collaborated with artists such as Anoushka Shankar, Imogen Heap and Joss Stone. He has also worked as a music arranger in the Legendary Lata Mangeshkar's albums, "Antarnaad" - a collection of poems by Shri Atal Behari Vajpayee, "Saadgi" - a collection of ghazals by Javed Akhtar and other renowned Poets, and “Sarhadein” - a one of its kind Ghazal Album featuring all time legends such as Mehdi Hassan, Lata Mangeshkar and Gulam Ali, to contemporary favourites like Hariharan, Suresh Wadkar, Rekha Bharadwaj and Sonu Nigam.

Ashwin has been a core member of acclaimed composer Nitin Sawhney's band for several years, having performed and featured heavily across Nitin's studio and stage work. Ashwin is also an integral part of Oscar-award winning composer A.R. Rahman's touring band.